‘Seeing is Believing: The Politics of the Visual’ by Rod Stoneman. A Review by Gareth Damian Martin. 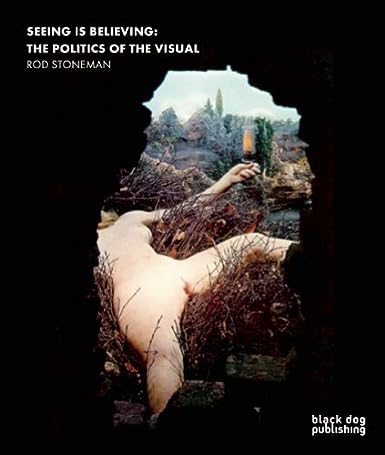 Seeing is Believing: The Politics of the Visual (Black Dog Publishing)

A Review by Gareth Damian Martin

The image system is as wide as any landscape, and thinner than we can measure. It settles over everything, like a dust-sheet across the furniture of a derelict house, confusing forms and creating new ones as it does. Flimsy and yet impenetrable, it resists any attempt to uncover what lies beneath. Yet it isn’t one unbroken surface, or even a patchwork of single units, it is an ocean of assimilated faces, propagated endlessly in digital realities, plastered to the inside of the icon of our times: the screen.

This is the barrier that Seeing is Believing: The Politics of the Visual navigates; existing as a free-wheeling analysis of visual communication that aims to get between world and image. Written by director of the Huston School of Film & Digital Media, Rod Stoneman, it is drawn from the decades worth of experience he gained in the commissioning meetings of Channel 4 and the board room of the Bord Scannan na hEireann (Irish Film Board). Taking the form of fifty five separate essays, split across five sections – which are slash-split themselves with titles such as History/Politics, Art/Culture – it is a fearlessly fractured evocation of an equally fractured system, wide and borderless as its subject.

Addressing subjects from the terrorist acts of September 11th, to the semiotics of firework displays, Stoneman’s writing proudly carries the incoherence in such combinations, and yet finds meaning in the confluence of ideas that flourish between explosions of imagery of one class and another. There are iconoclastic essays that chip away at the image of Captain Oates’ Antarctic heroism and Ernest Hemingway’s masculinity, alongside others that prop-up icons, explaining how Duchamp managed to “evade the image system”. This inconsistency driven by the dual subject at the heart of Seeing is Believing. Alongside its discussion of the image system, Stoneman’s book is distinctly autobiographical, and unafraid of blending opinion and statement, references and ruminations. The result is a collection of texts that, at their best feel like snatches of insight imbued with a strongly personal edge, and at their worst, like dinner party conversation, running roughshod across history and politics in pursuit of some personal vendetta. One two-page essay entitled Starcitecture, begins with a discussion of postmodern architecture and an image of Frank Gehry’s Walt Disney Concert Hall, and ends with a set of images of Stoneman’s own house and the claim that “it is an implicit critique of bad taste, lazy planning, and the collusive venal structures that underwrite them.” Presenting the house he lives in as a critique of Gehry’s work feels like the mistake of a writer unable to separate himself from the subject, instead seeing the values of others always in relation to his own. The same essay quotes the Aboriginal saying: “touch this earth lightly”, an irony for a writer who undermines his own work with a heavy hand, imprinting his signature with each stroke.

This trait means Seeing is Believing is a series of texts as much about its author as it is about the politics of the visual. Stoneman admits a “scepticism of academia” in the book’s preface and it is this that seems to, at times, lead him into intellectual dead-ends, as a headstrong thinker desperate to forge ahead with little aid from contemporary theorists of image politics. Not that theory does not feature; Stoneman regularly pulls quotes from a few key academics, including Adorno and Bourdieu, but the influence of Roland Barthes feels the strongest. Seeing is Believing‘s wide and fractured discussions may be distant from Barthes’ controlled and slow-building arguments, but the presence of the personal in Stoneman’s book evokes Barthes viscerally personal Camera Lucida. While Stoneman’s work may feel too self-aware to encompass the same raw emotion, it feels in direct dialogue with Camera Lucida. Stoneman even includes an image of his mother at the end of the book, coupled with a paragraph of analysis, although, like every word of the book, it is an image that he is equally present in, looking curiously towards the borders of his first photograph.

This is a presence that at times feels justified; after all Stoneman is a man who, after showing a scratch video about John Heartfield’s 1930′s anti-Nazi photomontages on Channel 4, received a phonecall the next morning from Saatchi & Saatchi, wanting to know how they could get in touch with Heartfield’s agent. Seeing is Believing gives the distinct impression of a life spent navigating both the market and meaning of the image, both in Stonemans’ propensity towards titles that sound like headlines, and his precise articulation of image and subject. Stoneman is at his best when he is in his natural habitat of arts and media, or on the subject of his adopted home of Ireland. His essay on a portrait of footballer Roy Keane with a bird skull, which draws connections to the violence implicit both in the image and Keanes’ on-pitch behaviour, is a rich and densely evocative piece, speaking through the gaps between image and text, representation and presentation. It is chief among a set of Stoneman’s essay that manage to wedge themselves into the image system and pry it open, revealing something unseeable.

Yet the image that Seeing is Believing is one of the Stoneman himself, scribbling frantically in an darkened hotel room, or train carriage while beset by phone calls demanding his presence at a technicolor selection of programme review meetings. This image of the author is one that always seems to be visible beneath this collection of texts and images, like a passport hologram, flowering brightly from this angle or that. At one moment Stoneman is crisply present in the text, argumentative and direct, and yet in another he fades, concealed behind a flock of other images. This presence is most strongly felt in a short quotation, hidden among the acknowledgements at the back of the book. Either an admission of guilt or an ironically stated challenge from Stoneman to his detractors, it reads “A remarkable exposition of Bogus Scholarship” and is accredited to TS Eliot. Whether this raises a wry smile or an exasperated sigh is perhaps indicative of how you will feel about Seeing is Believing, but it is difficult to imagine a reader leaving its pages without carrying a few of its more potent images with them, silently assimilated into their own system.

Seeing is Believing: The Politics of the Visual is published by Black Dog Publishing and is out now.

Gareth Damian Martin is a writer concerned with digital culture, virtual spaces and crude illusions. Currently an MA student at Royal Holloway, find out more about his writing and research at http://jumpovertheage.com

Recommended Reading: Katherine Koch on Growing Up Among the New York School

International copyright on all contributions remains with the author.